As I prepared to teach drawing comics to children for the first time last January, a friend told me about how as a girl she and her brother would run home after school to watch Captain Mark and his Secret City on TV. Mark Kistler, alias Captain Mark, is an educator who invites kids to practice key drawing concepts by leading them through quick-paced warm-ups and challenges. You can view his energetic approach at this video link: https://www.youtube.com/watch?v=wgLeSe8pN3s. Kistler’s show (not least his jumpsuit) impressed me, but I wondered: wouldn’t students quickly lose interest in drawing overlapping soup can after overlapping soup can, or in creating flowerpots, cakes, and stools out of the same foreshortened circle? Still, I liked the approach enough and had no better ideas, so I tried it.

We practice drawing Secret City-inspired warm-ups at the start of every Comics class, now in its fourth session. To upper-elementary students aged 8-11, the skill of creating depth on a two-dimensional page is new. As we practiced foreshortening concepts related to depth (overlapping, shading, shadows, surface, contour, density, size), I saw that the repetition wasn’t boring, but useful. It breeds just the right amount of familiarity to complement the anticipation of “what will we make this week?” Thanks, Captain Mark.

The students and I share a passion for making comics. My job as teacher is to notice where their interests lie—expressive characters? witty punchlines? sprawling action epics?—and give them an uncomplicated framework in which to deepen their skills, and thereby deepen their passion. That is a learning process: it took three tries to get a worksheet about lettering to the point where it seemed useful to most of the class. You can see the progression below, as well as excellent work on the final worksheet by current student Lola L.:

Captain Mark taught me that repeated practice of key concepts within a simple framework can be a springboard for great invention.

Last fall before the first meeting of Calligraphy class, a mother explained why her son was enrolled. “He wants to be a doctor when he grows up, but his handwriting is terrible! If you want to help people, I told him, what you write must be easy for others to read.” I suspect that many of the parents of the children with whom I work want their child to write competently and with care. Below I will outline two important reasons why writing remains relevant today.

Today’s parents receive a daily education in how digital media shapes people’s interests and goals. Yet many, like the mom quoted above, recognize that we still often face situations where it is quickest and easiest to think and communicate by hand. That remains the main purpose of handwriting, a human invention that reaches back thousands of years. One important moment in its history occurred during the Renaissance when, as the author Jan Adkins writes, “everyday handwriting gained greater importance. Communication was the current of rebirth, running from one mind to another between cities and countries.” Italian writing masters disseminated a slanted, current (running-together) script known today as Italic. Here it is in use at the San Francisco Public Library: 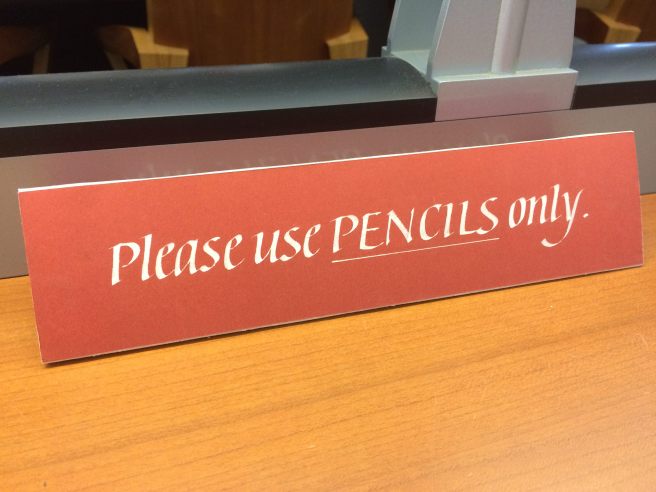 Italic’s structure lends itself to being written quickly, and its letters, derived from natural hand movements, make it possible for young children to learn. For centuries the written Western alphabet has been taught systematically in public schools throughout Europe, and the Italic hand has often been the model. Today in the United States, it is rare that handwriting gets much formal treatment. No national standards exist for it beyond the first grade and the standard instruction that is offered is deficient—a subject for a future post. Lately, the de-prioritization of writing seems to have accelerated: some parents of elementary-age children recall that their own writing lessons spanned several grade levels, and that Writing was given roughly equivalent emphasis to Reading and Arithmetic (the so-called “3 R’s”). Whatever policymakers think, parents and teachers today continue to see a need for young students to be trained in how to write in a legible, controlled hand.

Beyond utility, a more important reason exists for learning to write well. It is more difficult to put into words. People enjoy making deliberate marks by hand on a deeper-than-thinking level. I glimpse this in the faces of the eight-to-ten-year-olds experimenting with the thick and thin marks made by a chisel-tipped pen dipped in ink, and with five-year-olds who smile proudly at the long line of zig-zag chalk lines that they have transformed into a snake. Scientists deem such enjoyment a “useful cognitive exercise.” In the rush to produce digitally-literate future workers (a push that is felt worldwide), we sever ourselves from both an ancient human tradition and a basic human need: to be understood, to communicate clearly in our own voice. Of course, this is a skill that emerges gradually, out of many years of sustained practice.

For an excellent introduction to the history of the Western alphabet, read “Letterbox: The Art and History of Letters” by Jan Adkins.